Unity at the Top

In 1862, Charles Hazzard, an “agent” of London “capitalists”, sent a letter to New York “capitalists” associates. This explosive little document became publicly known as the Hazzard Circular in 1886, and was reprinted in The Little Statesman, “A Middle-of-the-Road Manual for American Voters” in 1895: 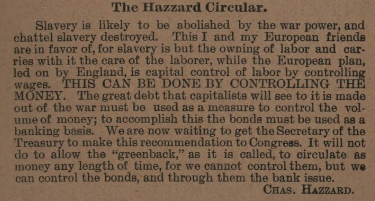 We did not read the words “black” or “white”, nor “negro”. Instead we hear of strategies for controlling labor. The agenda  behind debt is not profligate spending or expensive government programs, but about controlling wages, and therefore the power of the lower orders. Serfdom was one method of pursuing this goal. Slavery was another. But those systems of control pale in comparison to the flexibility and relatively anesthetizing effects of “free labor” and “compromising” with it.

This circular should put an end to any debate of capitalism as a positive force (as if it wasn’t already obvious). We say this as devotees of the church of the Market (potentia, opulentia et Exsecutivus Supremus). We say this as a parent who would loves their violent mutant child monster. Capitalism is the way of the Supreme Executive, therefore We are devoted to it. To the advanced ruling class minion this means that Our excesses must be reigned in despite Our attempts to fight their prevention. The rank and file mustn’t take the Establishment media news to seriously. How does one convey that to the unthinking masses?

The circular should also expose the Libertarian gold agenda. They want a tighter squeeze on “money” by tying it to gold. The ruling class would thus be enabled to cut programs and abort public investment in the name of necessary fiscal austerity. Here,  is some background on the circular, written by bankers naturally enough. We also direct the reader to Our previous post dealing with the creation of racism and the “white” race in order to better manage the masses.

Fiscal austerity is a farce of course. One sees here the class solidarity exhibited in the Circular. Trump’s bill cuts taxes for the richest while spending four billion on “missile defense”, and eliminates many lower order benefits and investments. After the signing, he said to his friends at a party at his Mar-a-lago resort “You all just got a lot richer”. That’s solidarity for you. “And the masses are still miserably indebted,” he might have added. Some members of the Preservation Society were in attendance, and We raised Our glasses to Our good fortune, but being devotees of the Supreme Executive, We see the need to go beyond Our superficial ruling class interests.

The Liberal might object: No Democrat voted for this bill. Many “successful” Liberals “courageously” opposed it as well. We reply: in ruling class society, failure is the Liberal’s bread and butter, that is, if they are not successfully implementing ruling class policies themselves. Do the lowly rank and file recall that Obama came into office with a “mandate” margin of victory, and both houses on his side? What did he do? The well-bred herd know what to think. Conscious individuals know he worked the ruling class agenda.

Even as the ruling class has concerned itself with self-enrichment, wage controls and imposing debt on the masses, what is it that the Liberal Establishment gives Us? Concern about wages, jobs, opportunity, increasing surveillance, prisons-for-profit, crumbling infrastructure, bigotry as a ruling class tool? No, of course not. It is identity uber alles to the point of racism from the other side. The rise of Ta Nehisi Coates and his prominence all over the mainstream media demonstrate the push to stoke racial tensions. Coates would have us believe that Obama was a president for the black down-trodden — but not because he has darker skin complexion. That is most preposterous! Speaking of the Obama presidency in his highly pubicized article The First White President, Coates wrote:

. . . Donald Trump arrived in the wake of something more potent—an entire nigger presidency with nigger health care, nigger climate accords, and nigger justice reform, all of which could be targeted for destruction or redemption, thus reifying the idea of being white.

Only the delusional Liberal will not be embarrassed by such a statement. For Coates the standard Liberal capitulation to corporate dictates, which presumably would be racist under Conservatives or white Liberals, are exalted as a veritable “nigger” revolution under Obama (see how that revolution went here). Like the Hazzard Circular, Obama’s major concern was for the banks, and the integrity of debt as foreclosure.

Curiously this “nigger presidency”, in all its blatant failures, strengthen white supremacist perceptions. How about Coates’s (willful) ignorance, and what seems like bigotry? What does this tell a white individual who thought, with perhaps the same level of ignorance as Coates, that Trump was different from the Establishment Republican, that he would bring jobs back, end the wars, and invest in America? The “nigger presidency” didn’t do these things. Why not try something different?

While Coates aides divide and conquer, and Trump and his friends lifted Our flutes of champagne in the spirit of cooperation and profit, two San Diego State University professors claim Farmers’ markets are racist because they cause “environmental gentrification”. We are not experts in “environmental gentrification”, but We can tell you that most farmers’ markets appear in more prosperous areas, not in poor neighborhoods.

In New York, the poor masses had long since been swept away from Union Square, and other areas hosting farmers’ markets. The professors who wrote the piece for an anthology, complain about the “whiteness of farmers’ markets” as if poor whites don’t exist or count. Why is that only non-white individuals have the privileged of being poor and excluded? Some of Us have personally witness many African-Americans apparently enjoying these obsenities to Big Food. The moral of the story is that we should not have farmers’ market, even though the food is often healthier than supermarket food, and produced by local and regional farmers rather than big agriculture. This is the heart of the matter.

The professors could argue for a more effective distribution of quality food. Rather than subsidizing Big Agra like Monsanto and Cargill, the government should subsidize regional organic farmers so that all may benefit. Could it be these professors are helping the ruling class kill two birds with one stone. Big Food is protected from competition by focusing on, and stoking racial division. That Big Food doesn’t care about poor individuals is not the problem, but relatively powerless gentrifying white individuals are.

We also note, that We found this item on on a Conservative site, and could not find it reported on a Liberal site.

Meanwhile, did you know “white fragility” has officially been a word since 2011. No less an authority than the Oxford Dictionary says so: 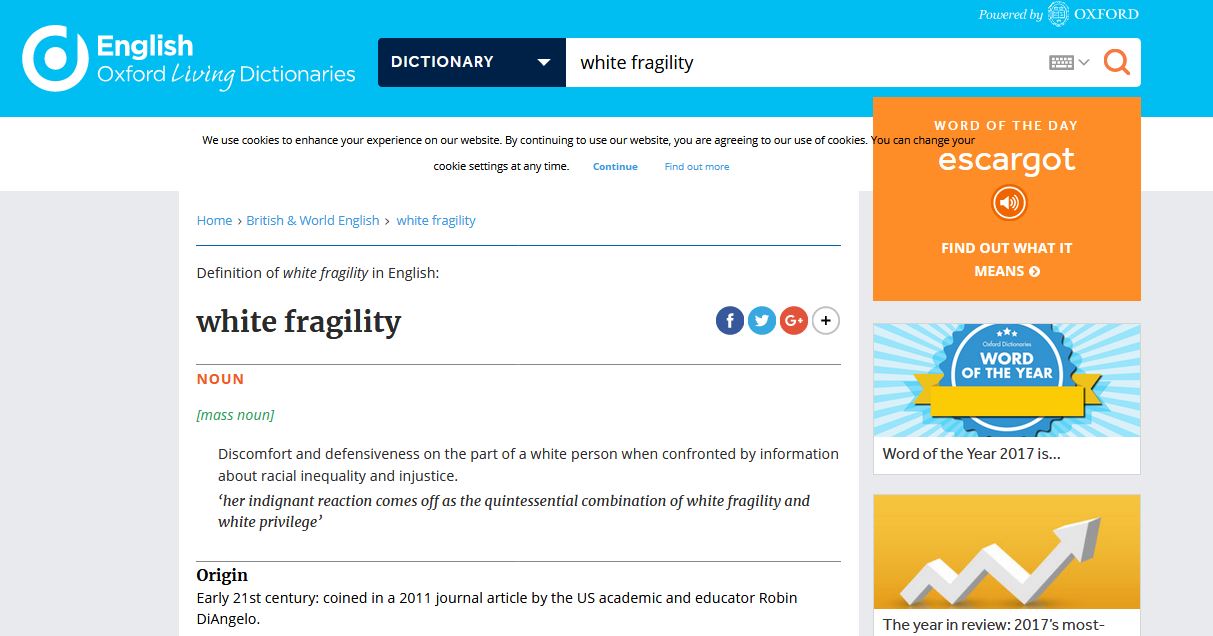 But “Black fragility” doesn’t exist. Only “whites” are sensitive about racial inequality, while “blacks” presumably have never expressed any hypersensitivity on such matters. We are reminded of an incident We heard from an informant of the lower orders. She was an activist at a local media outlet. It was around the time of the Amadou Diallo trial.

One afternoon, an African-American man came to the office and announced he would attempt to bring a camera into court the next morning, which was not allowed. He intended on getting arrested in an apparent attempt to bring more attention to the case. He requested that someone from the collective meet him there and film his impending arrest. No one showed up. The next afternoon he came back and flew into a rage at the privileged, racists cowards of the collective and ranted at the group. Did anyone, black or white, have an obligation to take time out of their morning and go to Brooklyn for pointless outing? He scolded and berated a group of individuals who devoted much of their time trying to connect with “communities of color” and did workshops in Harlem and other neighborhoods. Racism was not the issue, but it was his hang up. Why is this episode not an example of “black fragility”?

We might add that as of this date the word “white guilt”, which is certainly much more prevalent than “white fragility”, is not found in the Oxford dictionary. Is it possible that, just as the Establishment encourages individuals to view everything through the lens of racism, the somewhat diverse media collective mentioned above demonstrated their “white guilt” by forbidding white males to speak up at their meetings until “others” had the “opportunity” to speak up first?

But the psy-ops doesn’t stop there. A few neo-cons have jumped onto the identity bandwagon in order to trash the Trump bandwagon, which itself is a rejection of the established political order. War-mongers like Max Boot and Bill Krystal have suddenly found their inner progressives.

Tweets Boot, “I once scoffed at claims of ‘white male privilege,’ dismissing such criticisms as mere ‘political correctness.’ But in the Trump era I have had my consciousness raised.”

Behind the cover of Establishment media, the Agenda of keeping social division alive and well moves forward. It allows Us to continue to pursue slavery by other means, namely keeping the masses in debt. We get richer, you get stuck with the bill.

Unity at the top, division down below.

2 thoughts on “Unity at the Top, Division Down Below”

As an Amazon associate, I earn from qualifying purchases.